I’m very excited to announce that we finally reached 1000 likes on our Facebook page! Thank you to all of the supporters in both women’s BMX, but also supporters of Magnolia BMX. Just like the Q&A below with Alise Post, it’s that much more special because you were involved.  Ideally, the questions below are targeted to someone who’s already racing but looking to develop further through workouts and nutrition. Please note, even though Alise is a trained professional, her tips below are purely from her own experiences, it may not be for everybody. Consult your doctor or BMX coach before any changes to your regime, and don’t sue us. 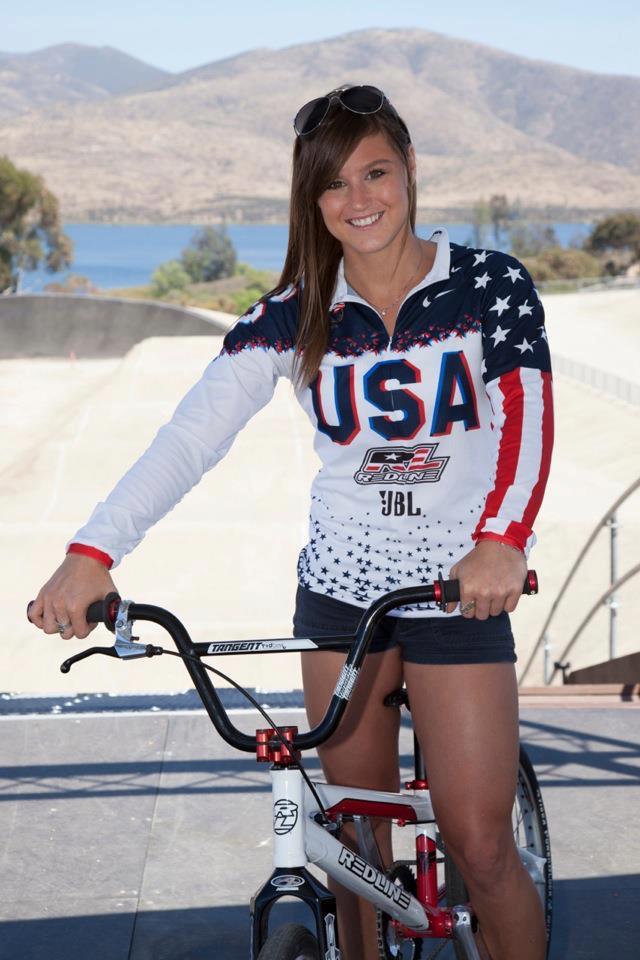 My name is Alise Post, and I started BMX Racing when I was 6 years old in Minnesota. My older brother started about 2 weeks before me, and saw other little girls at the track and talked my parents into dragging me along to try it out and toughen his little sis up before she got into anything too girly he couldn’t enjoy with me 😉 When I first tried though, I was too scared. I walked up to the starting gate and decided the hill was too big and I was not about to race down it. So, my parents nearly pulled the plug and got my membership money back, but instead let me have one more try. And the rest they say…is history.

I started racing at some national races when I was about 9 and I won my age group for the year. This success led my parents to take me around the country to see if I could compete with the best and get myself on a sponsored team. I ended up winning the Overall Amateur #1 Girl Title at age 10 that next year (2001) and getting on my first sponsored team. I won 3 more of those overall amateur titles in the following years, before turning professional at age 15 (2006). Winning the overall number one American female pro title my first two years in the pro class was a huge honor, and drove me to start racing more on the international level as BMX was joining the Olympic Games in 2008. Although I would be too young to aim to compete in Beijing, I kept racing the international scene gaining experience for the London 2012 Qualification process and annual BMX World Championships. After graduating high school in 2009 I moved to San Diego to start college and train at the Olympic BMX base at the Chula Vista Olympic Training City near San Diego. 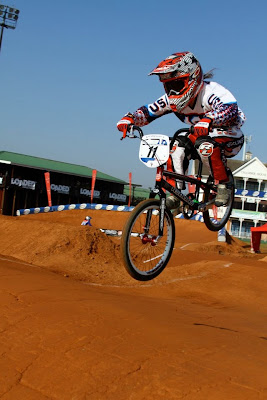 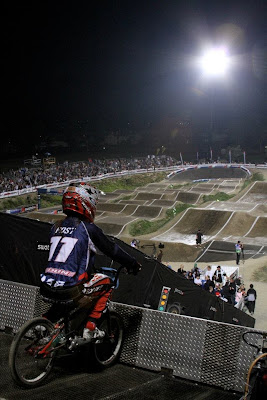 After making these living changes, giving up my other sports (gymnastics and track and field), and focusing on my BMX progression, I gradually progressed my way into more and more World Cup International finals and podium results. Although injury side lined me for both winter 2010 and the first 6 months of our London Olympic qualifying process (2011/12), 2012 gave me some career highlights. I managed to win my first World Cup in Holland, and represent the USA at the London Olympic Games. Although injury struck once again during olympic competition, leaving me to the rehab process for another few months, my finish to 2012 and start to the 2013 season have provided me some of the best riding and racing I’ve ever had in my career. It has been truly amazing to compete on the national and world stage. Everyday

I wake up and remember how lucky I am to continue being able to do what I love, and to have had my current sponsors stick behind me through the ups and the downs the past few years. Those sponsors include both Redline Bicycles and JBL Audio, with Oakley, Troy Lee Designs, ONYX and Tangent Products in tow. I am also supported by the USA Cycling program at international events. 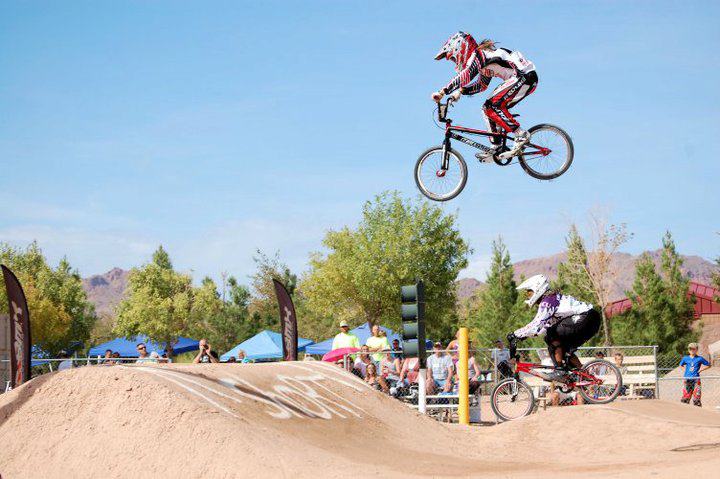 Between being on your bike and working out at the gym, what would you say is the percentage between the two?

I definitely spend more time on my bike than in the gym. While there is a component in racing that requires explosive power and speed, without working on specific bike handling and strength a lot it’s hard to apply anything gained in the gym. That said, specific gym days are definitely a part of my schedule.

At the gym, what workouts do you find beneficial, and are there workouts that are useless for racing?

Well I try to avoid the useless ones!!! haha. We’re a sprinting sport that requires us to be reactive, so most exercises and lifts in my program are done at a maximal speed and improve body awareness. AKA, less quantity and more intense. You’d have to look for me in the free weights and cross training areas at the gym because you won’t find me on the treadmill!!! 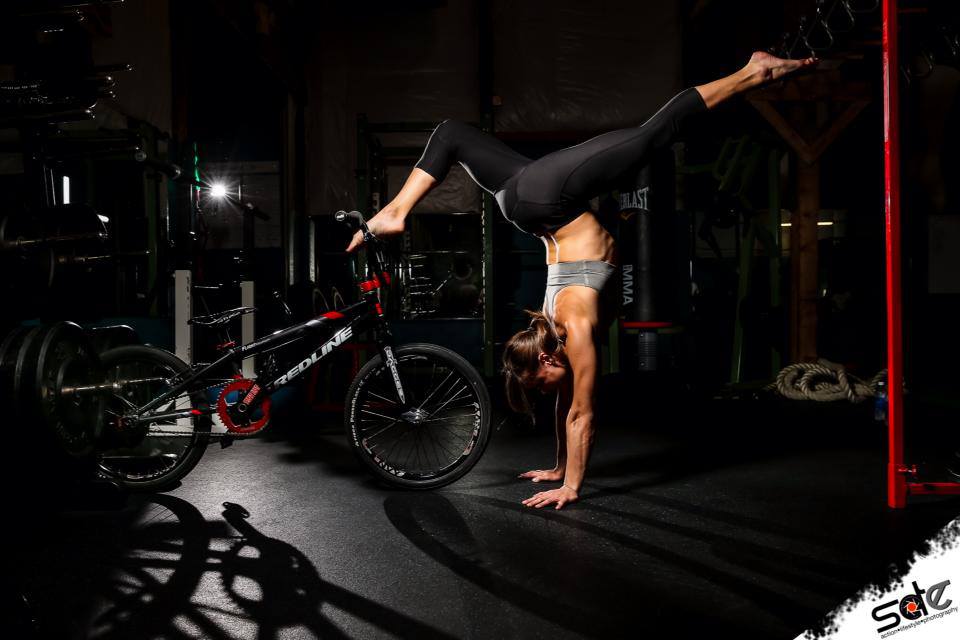 Scott LaFlemme wants to know “How much can she squat?”.

Haha Scott, it’s not about how MUCH you can squat as compared to your power:weight ratio, and how quick you can move the weight. And to be honest, probably not more than him since he’s probably bigger than me!!! ;-P

I’ve been told to do a lot of sprints, in order to get faster, so Dawn Robins asked “How often does she do sprints???”.

Sprints are a big part of my training both on and off the track because they build such specific strength. Of course we do different amounts of certain training at different times in the year, but I would say I generally spend 3-4x as much time on my bike training than in the gym.

What’s your general nutrition advice, are there foods that you’ve cut out completely, what are things that you eat to maintain and feed your muscles.

Obviously I don’t try to eat too many sweets and “garbage” food as you need have the proper fuel in your body to have the energy to get the best out of it, but I think the food pyramid is a pretty good guideline. Everything in moderation is okay by me, athletes are humans too. I try to get proteins back in my muscles right after workouts, and just mix up the meats in my dinners each night. I’ll eat fish a few times a week, steak a couple times, and throw some chicken and pasta nights in there. I can’t say I have anything that I absolutely will not EVER eat…but I can’t remember the last time I heated up a frozen dinner or bought frozen vegetables. I shop in the fresh section and start from scratch on things. It can be bit more expensive, but it’s better in taste and fuel.

“Pre-race nutrition–fast fuel for explosive energy is what I would like to know.” – Maureen Galivan

I do enjoy some coffee or caffeine and sugars around race and training time. I like to keep it simple..supplements can be scary for drug tested athletes!

I’m not too superstitious about stuff like that, I generally don’t load up on red meat the night before a race. I’d go for something a bit easier on the digestive system. But honestly, when it comes to the day of a big event, whatever is going to comfort you and make you happy and relaxed is the best thing to eat. As long as you generally have a good diet, put the work into your training, and have a clear head to compete, what you eat right before is not going to make the difference.

“What is your position on refined sugar?” – Anonymous

It’s definitely not something you should be consuming every meal, but like I said, everything in moderation is okay. Having a little dessert isn’t going to kill you if you put all the right nutrients in first.

“What is your advice for parents of a young female racer.” – Pat Fisher

Let her enjoy riding her bike everywhere! Work on skills riding curbs, skateparks, tracks, everywhere! Race the boys and beat ’em. At the end of the day, we are all trying to ride as much like boys as we can and we should learn from them. I know first hand a lot of girls don’t spend enough time on their bikes as kids and it makes it harder to learn things in the long run. Trust me, taking spills hurts a lot more when you get a bit older and fear sets in!

Do you have any final words for aspiring racers?

ENJOY WHAT YOU DO!!! While training, racing, getting knocked down and back up again can all be tough at times, if you love what you’re doing it will never feel like a job.