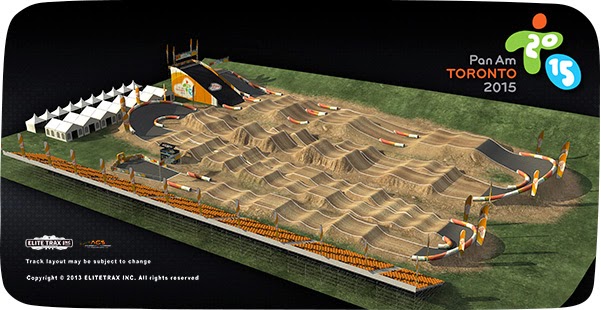 After much debate and planning, it looks like the construction of the Pan Am Games BMX track is underway. The organization has been receiving a lot of criticism over the spending abuse of many projects including this track, which was originally projected to cost 1.5 million, now at least 4.4 million.

There’s been a lot of talk as to where this track should go, many residence not thrilled with the current location, including arguments from Toronto city major Rob Ford, stating that elderly people would never ride BMX bikes, circling back to say that if it rains, you can’t use it. Fortunately, Major Ford was unsuccessful in moving the facility out of Centennial Park.  The track is designed to meet the International Cycling Union (UCI) certification standards, meaning we should hopefully see Etobicoke as a destination for future UCI Supercross events.

Of course, being biased that I am, I would have preferred to see the track closer to my city, but with Etobicoke only being 40 minutes away, I can’t really complain. 4.4 million does seem very high for a race track, but when you consider that this is going to be a world class facility, you can’t really put a price on something like that – let’s just hope it lives up to its price tag.

“Located in Etobicoke, the 3.2-hectare Centennial Park Pan Am BMX Centre will be home to BMX cycling competitions at the TORONTO 2015 Pan Am Games. This regional park was opened to celebrate Canada’s 100th birthday and since 1967 has been a setting for many recreational activities. A new addition to the park, the BMX Centre will see riders launch from a permanent eight-metre start ramp onto a track that is being designed and constructed to meet Union Cycliste Internationale (UCI) certification standards. The Centennial Park Pan Am BMX Centre, jointly funded by the Government of Canada and the City of Toronto, will be a compact closed-looped design consisting of four straightaways and three banked turns filled with challenging jumps that will test the 25 male and 18 female riders competing in 2015. Spectator excitement will run high as BMX riders use their athleticism and skill to cut in and jump through the air as they race around this 350-metre track. Following the Games, the public will have access to this new facility. A permanent five-metre start ramp will be constructed beside the eight-metre start ramp to serve younger and inexperienced riders. “

Tickets for the Toronto 2015 Pan Am games, will be going on sale September 15 2014 at 10:00AM Eastern Time. To learn more http://www.toronto2015.org/venue/centennial-park-bmx-centre

Open
‘The better days 20”20’ with @teresagrauten

Open
Hey, everyone! @nataliebwade here from the great s