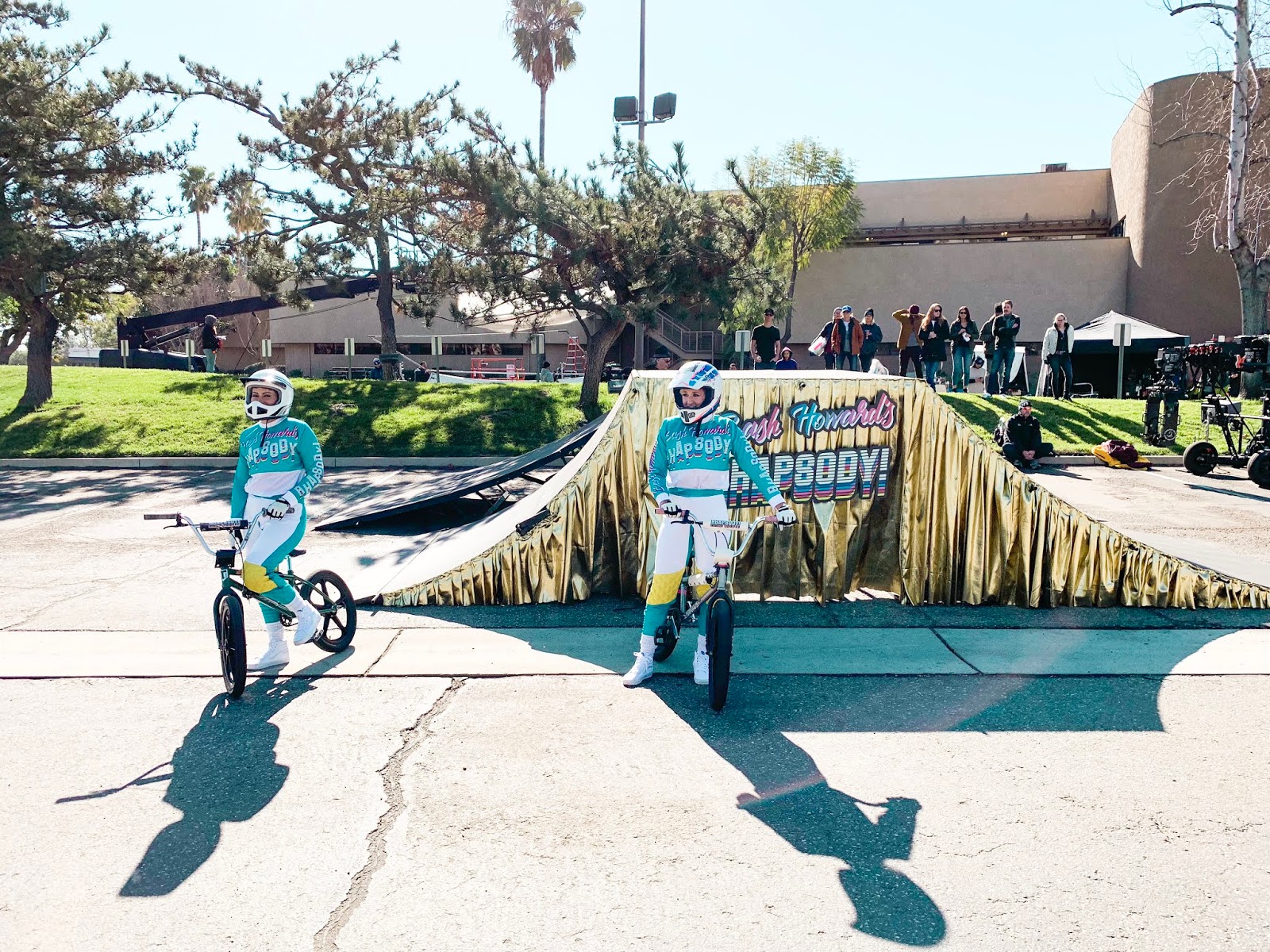 I don’t think anyone would have ever predicted women’s wresting and BMX would ever go together, but here we are. In the recent season of Glow on Netflix, in episode 8 “Keep Ridin'” at the 7:08 mark, the episode featured two female BMXer’s throwing down some old school 80s tricks. The scene is pretty awesome and featured a cameo with two of the most influential ladies in BMX today! I sent Angie Marino and Nina Buitrago the same set of questions to get their different perspectives on what it was like to shoot for a Netflix show. I loved the answers that came back, I hope you enjoy it too.
** Before reading, make sure you watch the quick cameo on Netflix. ** 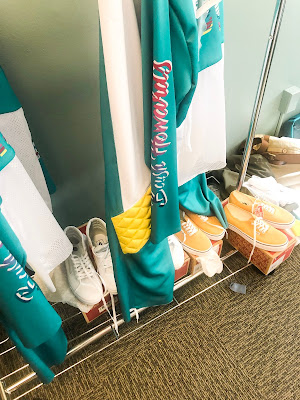 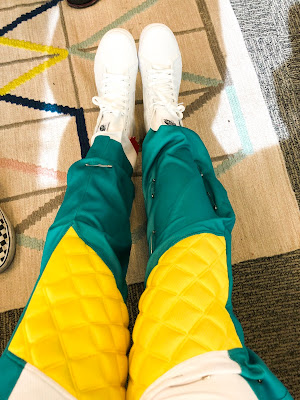 Hey you two, congratulations on making a debut on Glow! So how did you guys get the call for the gig and what was their pitch to you?

Nina: A fellow BMX rider and good friend, Danny Downey, who I met at a trail jam at Olive Grove trails in California is also a Hollywood stuntman! He has always been rad about hitting me up for any BMX gigs looking for female riders. He called me up with an opportunity and said he needed two gals to shred some 80s style scene and I gave him Angie’s info and then boom we met up like a week later!

Angie: I got a text from Nina saying that she passed along my info to a stunt coordinator. Shortly after that text, I got a phone call asking if I would be interested in riding on the show and if I was already a part of SAG.

From the time you got the call to when you had to be on set, how quick was the turnaround – how soon did they need you?

Nina: I feel like it all happened really quickly, we got on the phone, I booked a flight for a couple days later and was heading out to California!

Angie: We filmed at the beginning of March, so I really don’t remember how quick the turn around was. I remember it being fairly fast though. I think it was something along the lines of… are you available next week?! Usually with Hollywood for stunts, especially BMX, everything is super last minute and you basically have to be available as soon as the next day. 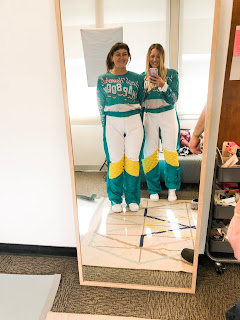 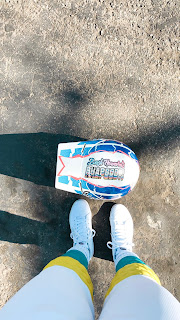 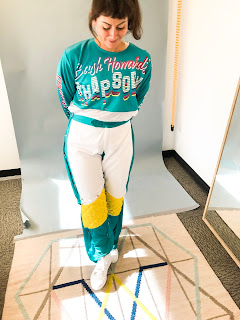 When you got on set, what was the filming schedule like?

Nina: Our first day we met up at a studio downtown LA to get fitted for costumes, try on helmets, ride the ramps and some skyway mag wheels thanks to Dan Hubbard!

Angie: As always, call times are at sunrise haha. Typically, you’re on set first thing in the morning when everyone else is, even if you’re not supposed to film until 6pm. Once the filming starts, it usually goes pretty fast. Once we started filming, I don’t think it took more than an hour at the very most to get the whole scene. 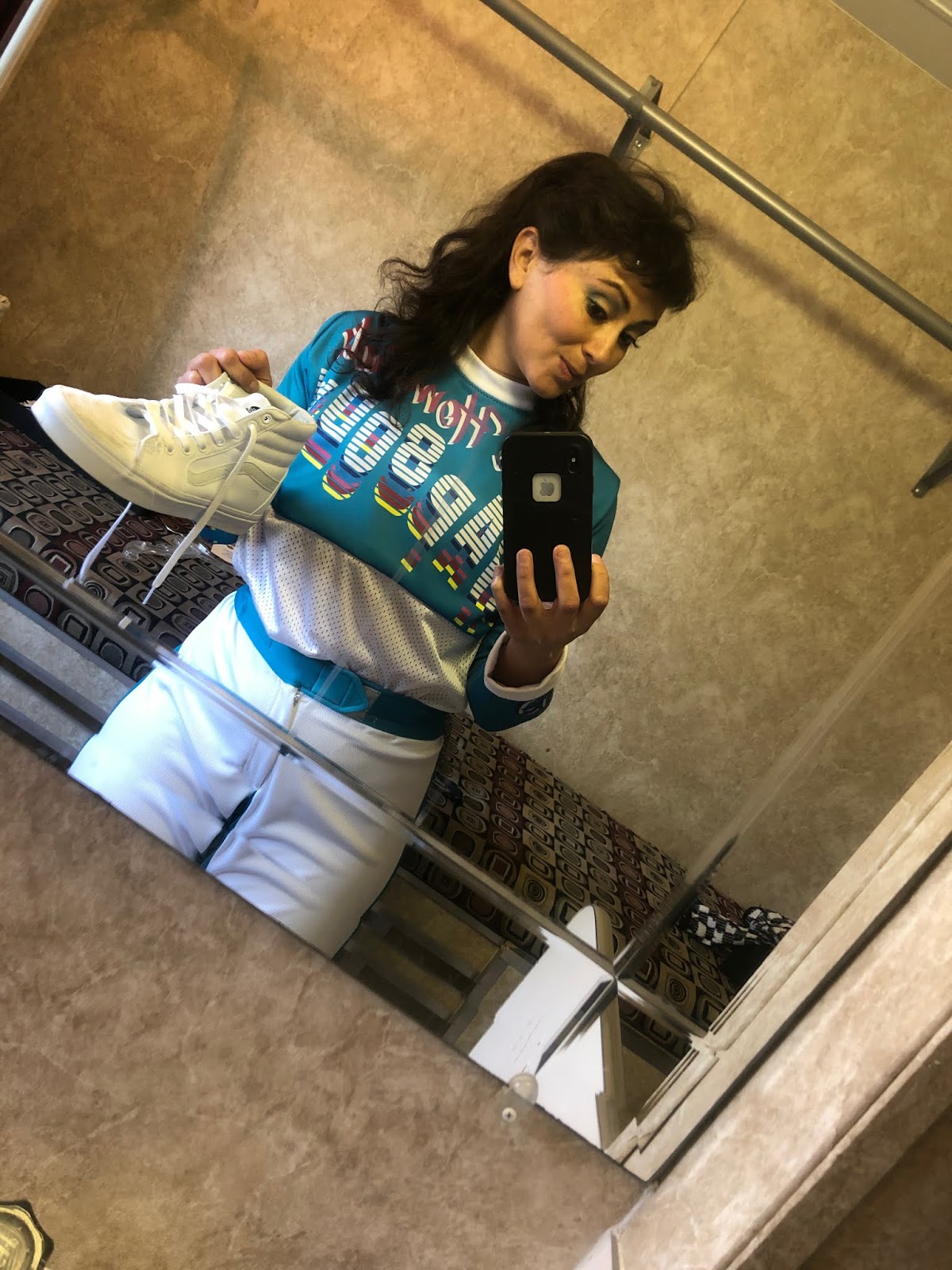 How much time did you guys get to play around with the ramps until it was shooting time?

Nina We had a full day on the ramps, the first part with our normal bike setups with some vintage moto full-face helmets haha, those were heavy and tough to see out of – they stuffed them with foam to eliminate bobble head effect. Took a short break for a costume fitting, and then had an hour or so with the mag wheels 🤣 . Dan Hubbard who brought his stunt show box jumps, he grew up riding in the 80s (era that the show takes place) so he helped us make sure the tricks weren’t too modern and were as true to the era as possible.

Angie We got one day to ride the ramps for a couple hours, but it was before we had the mag wheels on our bikes. The ramps were super easy to get used to, which made everything go smoothly. Then we got some practice time the day of filming with the mag wheels. 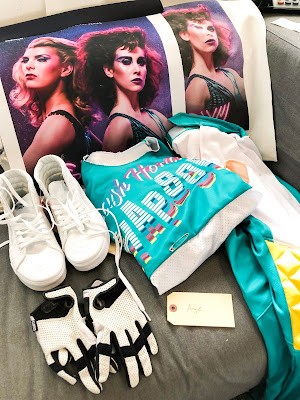 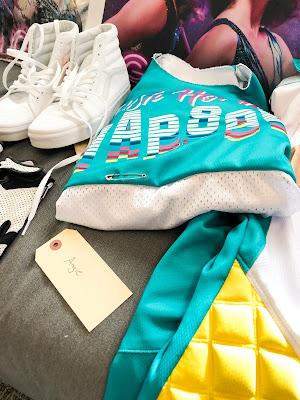 I noticed that the bikes had 80s style rims, but otherwise, everything else looked pretty much yours. Can you talk about what the producers did to your bike?

Nina: The show seemed to lean on Dan Hubbard for helping to source some mag wheels that worked with our current setups. Thankfully skyway has a 9t driver that worked with my gear ratio, I think Angie has LHD and there was some swapping of cranks and stuff haha but he got us rolling with legit skyway “Tuffy“ wheels I wish we got to keep lol. After our practice; Angie and I took our freshly retro-grade mag wheel setups, down to BMX night at the California training facility 🤣 we rode for a few more hours… we learned quickly that mags and concrete bowl corners don’t go together well, haha so much flex!! We rode well into the night even though we had a 5am call time or something (Had to make the most of my time with such a short trip!)

Angie: The major change was the wheels. The mag wheels alone made my bike look so retro! They had to cover up our normal logos and they added pads to give our bikes that vintage look. The stem pads were totally the wrong size and they had to zip tie them on hah! The also added some “Bash Howard’s Rhapsody!” stickers to our bike to match the helmets. 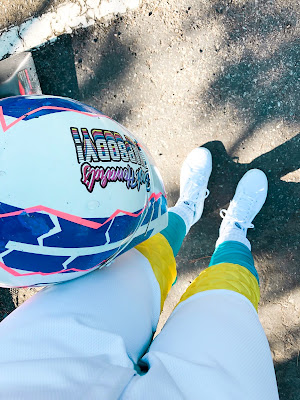 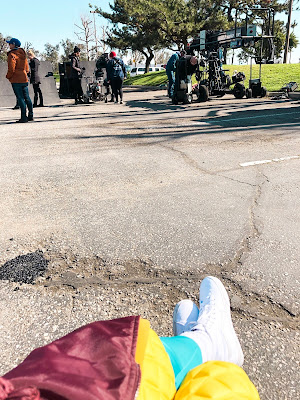 What was the wardrobe and hair/make up experience like? Would you rock the 80s look daily?

Nina: Omg we had the funnest time!! They made custom outfits bright 80s colors; with built-in lattice stitched knee pads… white Vans Sk8 hi pros, they took the tags off so couldn’t see any of the logos but Vans were legit AF!

Angie: They curled and teased the sh*t out of my hair! I basically had one big dread when I went home! Hair and make up is always so fun on set though! I always get into chatting with the stylists. All I have to say is that I hope I never have to film another 80’s part again! Nina rocked the look, I, on the other hand, felt very out of my element haha.

The cameo itself wasn’t too long, but how long was shooting for you guys? How many takes did it take?

Nina: Call-time was like 5am but we didn’t have wheels down for practice till around 8am, they approved the 9ft quarter pipe to start and turn around on, we had to figure out the timing so we were both in the air at the same time. We got to work with a rad stunt coordinator, Shauna Duggins, she helped us dial in the right spacing for what the director was looking for. Once we got that on lock, it was lots of chillin…probs didn’t shoot til closer to 11am. The riding takes we didn’t have to do too many but the “reveal” where we power skid up to Kate Nash, and take our helmets off, we had to do that take like 10x almost haha. I had a foam pad in my helmet that fell out on the ground in one, I almost skidded into Kate Nash another time, our timing was off, then we didn’t fluff our hair enough in synchronicity haha It was a LOT of fun and to get to the whole scene for Geena Davis in character?!! And for a lot of the cast, director and writer of GLOW?!’ AMAZING!!!

Angie: I don’t remember the exact time, but I remember it being super quick. They waste no time in the film industry. They did a few takes of each jump and then they did some extra takes of us taking our helmets off (which didn’t make it into the final episode… thank god…). 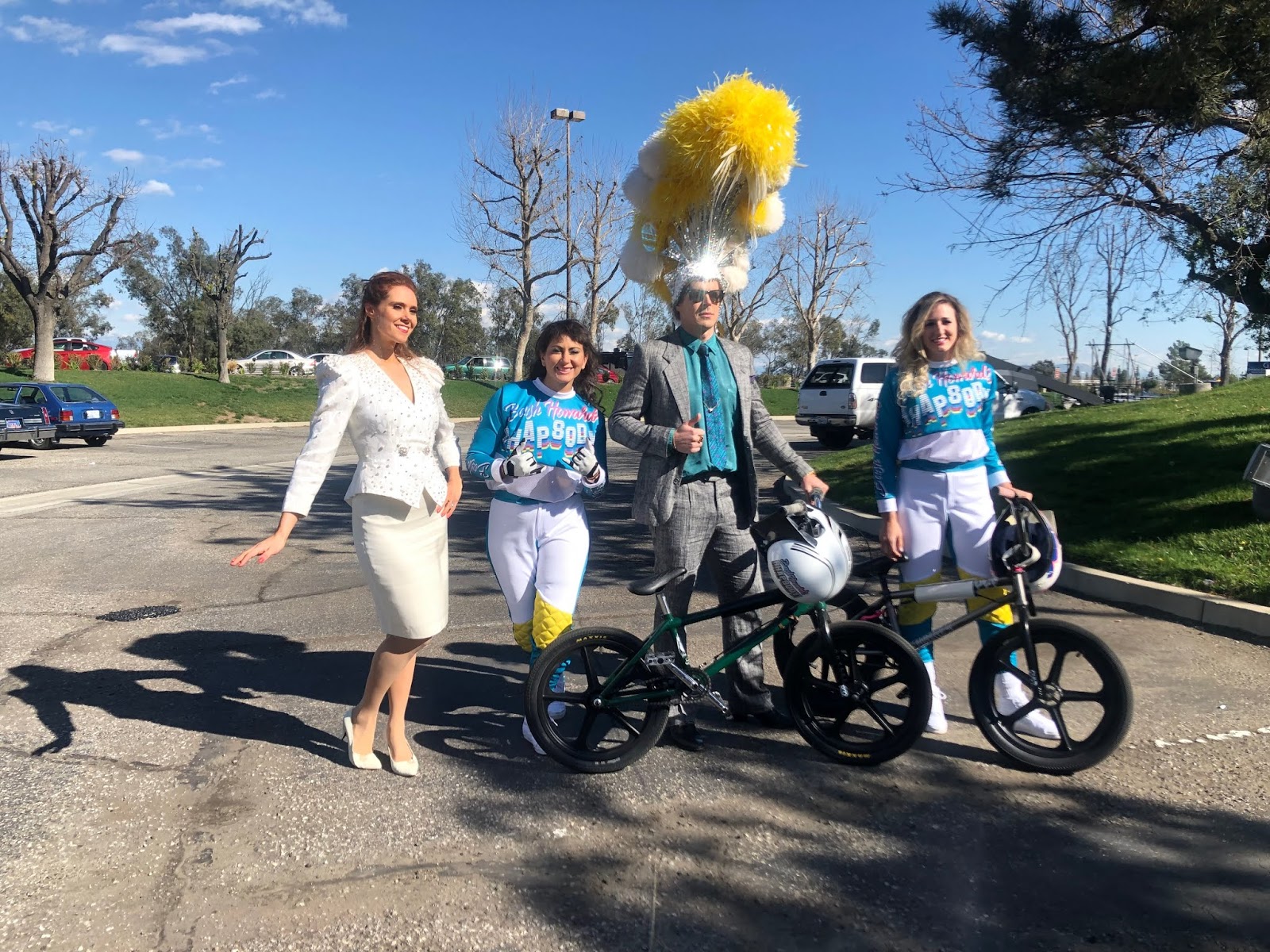 Actors always talk about the legendary craft services, was there one on your set?

Nina: Snacks and catering was nice before we hit the road from the set since I think we were so excited we didn’t eat much.

Angie: The crafty! It’s the bestttttttt. They will make you whatever your little heart desires, plus there are snacks on snacks. I had the best breakfast burrito and then after we shot, they had a really nice catered dinner for everyone.

Anything else you want to share from the experience?

Nina: I would love to do gigs like that ALL of the time!!! It was SUPER fun and honestly really happy I got to do this gig with Angie, we have been riding together for a long time and it has been a while since we got to have so much fun riding together outside of a contest 🙌🏻. From the costume fitting, rippin trains on box jumps, riding the CA training facility with mag wheels, and throwing the biggest cheesiest one-handers, x ups and no filters and getting paid??!!! And be on Netflix?! hahaha seriously One of the coolest gigs ever 🙌🏻 thank you BMX.

Angie: If you ever have the opportunity to be on a set, take it, just make sure you’re getting compensated for what you’re worth! It’s a really cool experience and you get to meet some awesome people. Don’t be shy, talk to people, ask questions. I’ve made a lot of cool friends and some great resources from being on set. 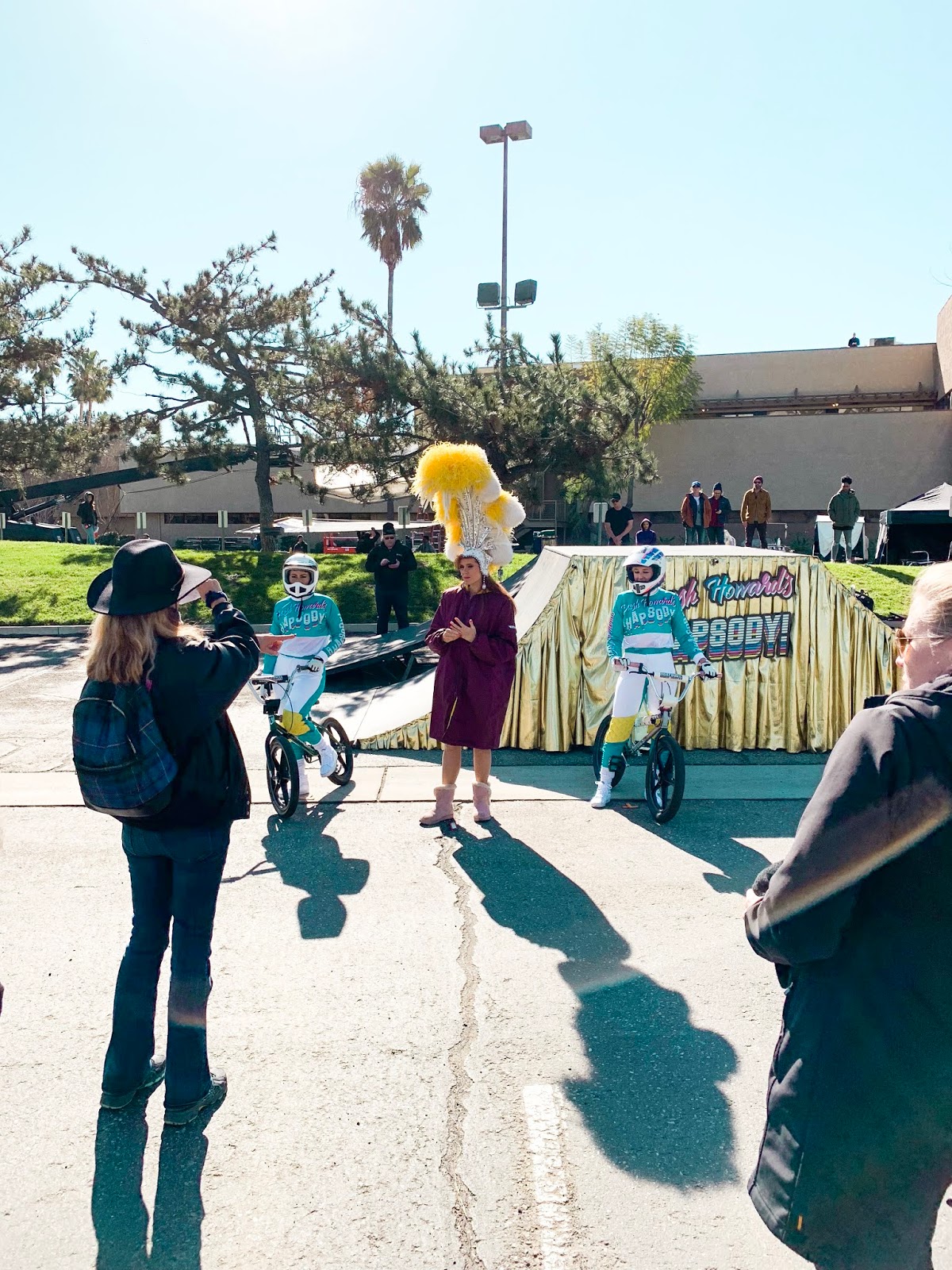 Catch up with Caroline - Return to Full Flight