I thought you guys would enjoy this interview I did with Jennie, who has a blog called http://bikergirl.se. Jennie is from Sweden and has decided to start BMX at the age of 28. I will have to say, BMX is so much better when you’re older, but there are also some down sides as well. Say hello to Jennie, new rider with an awesome attitude. 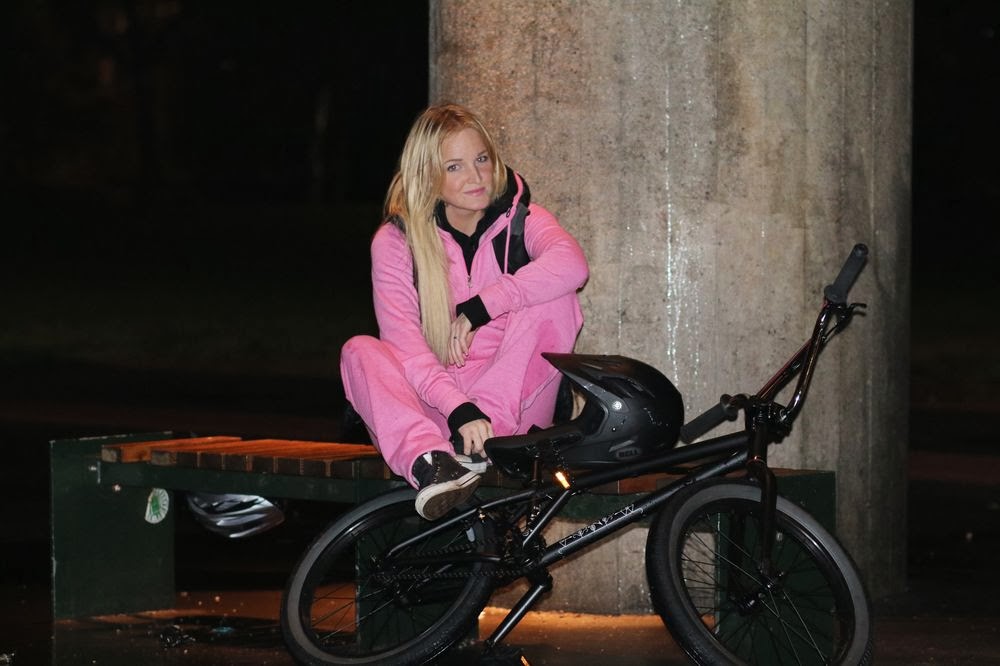 Could you introduce yourself?

My name is Jennie Hallestam, I was born on November, 1984, so I’m turning 29 soon 🙂 I was raised in the north of Sweden in a place called Kramfors. When I where about 15-16 I moved away from home, I guess I just felt that it was too small for me there, I had a bigger vision of my life.

I have always been that person who follows my heart and I rather live my dreams instead of dreaming about how life could be. I guess I have to thank my parents for always being so supporting. They have always been there for my, believed in me and cheered me on. They are the best!

Nowadays I live in Stockholm, the capital of Sweden. I work as a welder, I’m actually an educated “International Welding Specialist” with several welding licenses. That´s a long story too, LOL! I was actually a store manager at NK, Sweden’s most exclusive mall.

I was there for many years,  I know most girls here would do anything for my job, but I never felt that it was my thing, it wasn’t my dream. So one day I just woke up and decided to quit and follow my heart. So I went back to school and got a new education, this time as an welder and I LOVED! 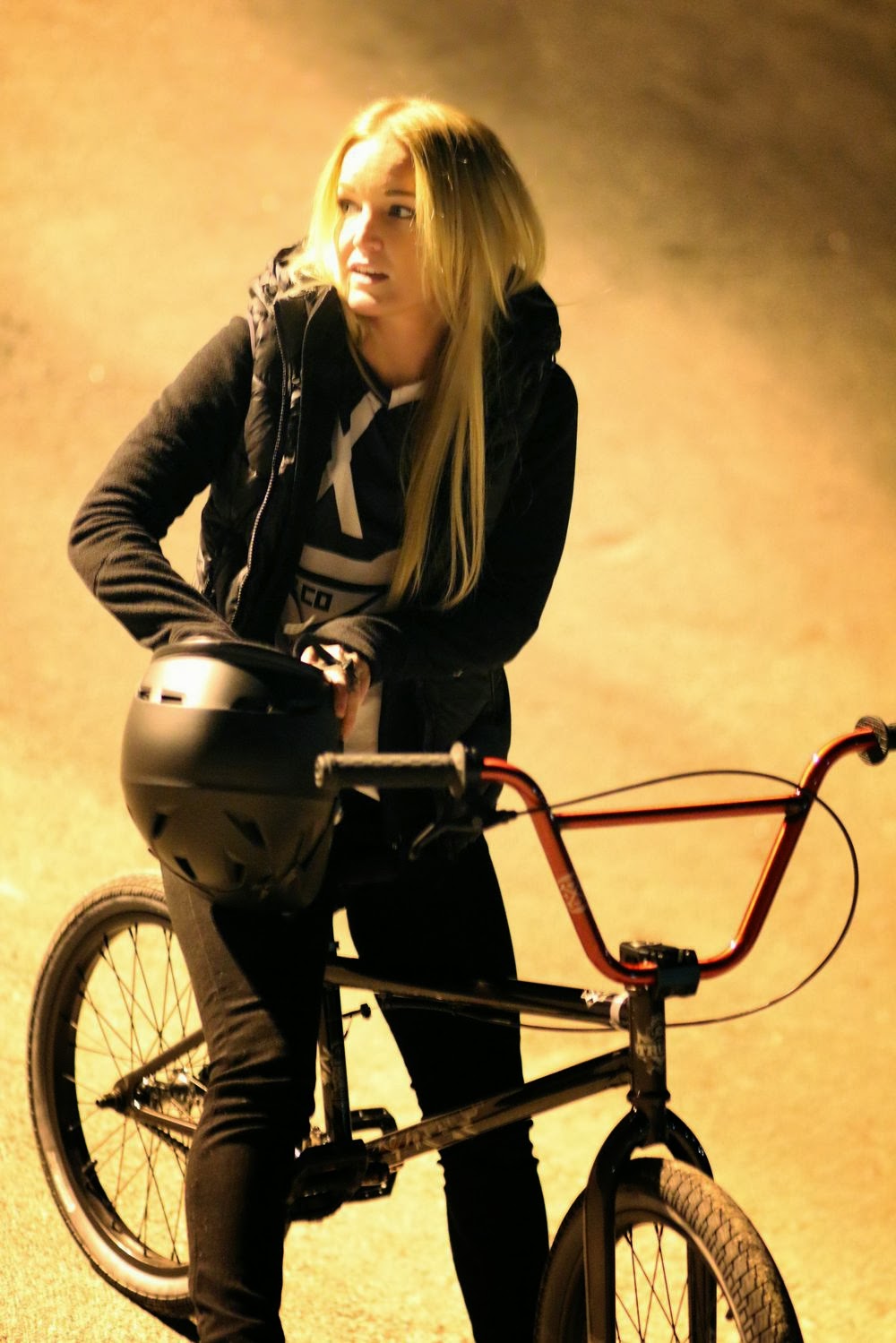 How did you get yourself into BMX?

BMX, it’s always been there in my head, I want to do that, I want to ride that bike, do the tricks and jumps, I want to be fast, faster, fastest! But still it’s a little bit scary to start this late, the older you get the harder it is to just put yourself out there, it’s like you have barrier in the head that tells you NO! But I have decided not to listen to that part. I’m going to put myself out there! It´s okay to fall, as long as you right back up there. I use to say that fall 7 times and stand up 8!

Well the short version, I bought my first bike just a couple of months back, like 6-7 months. I have 4 bikes today and I spend every single time I have to practice with my bikes. I just love the feeling out there! My goal is to learn how to do a backflip with my bike until the end of next summer.  The only boring thing is that there are so few places to ride the bmx in sweden.

I found your blog through Instagram and the first thing I noticed on your blog was the image “small changes can make a big difference”, which set the tone to what your blog was all about. I saw a girl who wanted to express her love for BMX, fashion and life through a blog and I thought that was pretty awesome. Could you tell me a little about the blog?

Yes,  you got it right 🙂 I want to express my love and I want to inspire others to do the same, to trust in themselves and to realize that it’s never to late to try! Be your own inspiration, you can do anything if you just believe in yourself! Be motivated, work hard and open your eyes for those small results and soon you’re going to see a big one! Give yourself goals along the way, do not be afraid to give yourself credit and remember to have FUN!!! I think fun is the key word! And also, it´s okay to fail over and over again as long as you don’t give up. Continue to struggle, sooner or later you will do it and it will be so worth it! I promise!

I first started to blog for a about 12 years ago, I wanted my family to be able to see what I was up to. So at first it was only for my family. But then along the way my friends started to follow it and they were so inspired so somewhere then I realized how easy and fun it is to inspire others. If I can reach out to only one person, that’s one more than none at all. Every single person counts! 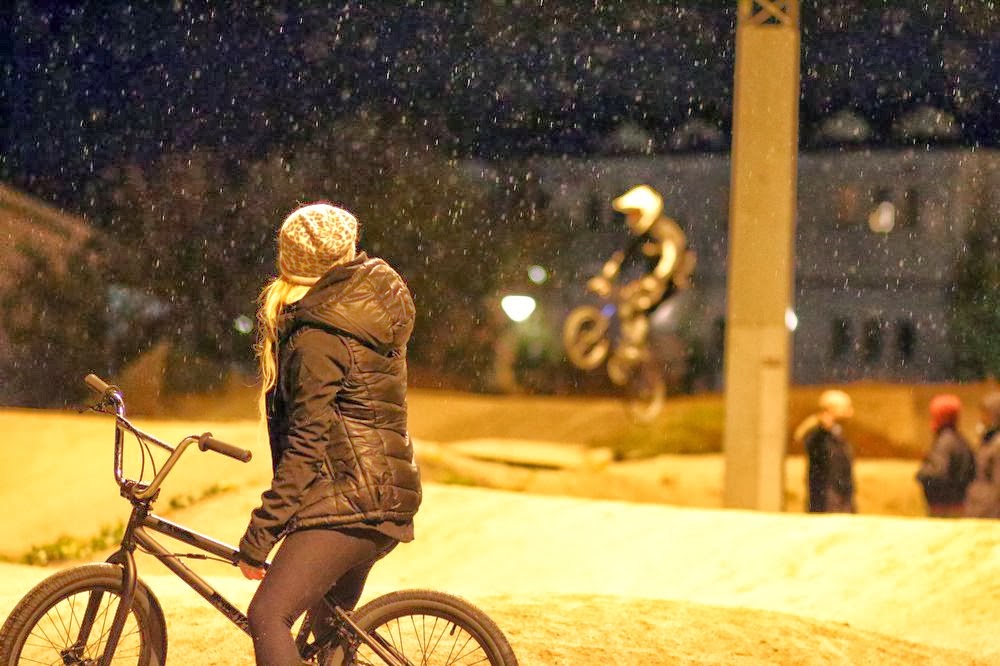 Being a new rider, what are some hurdles you have experienced so far?

Well I haven’t been riding for so very long, 6-7 months. The hardest thing I think is in my own head. At first I was so afraid of what others would think. Would they laugh at me when I fall, I was afraid that
I would have ROOKIE all over me. But when I opened my eyes I realized that it was the complete opposite. Everyone was so kind and supportive. When I’m out on the bike people come up to me and help me, teach me how to do things, how to learn, step by step. It was all in my head!

You said there isn’t a lot of places to ride in Sweden, so where do you go?

Here in Stockholm where I live, we have 3 different outside parks where you can ride your BMX. The biggest problem is that the summer is so short here. Right now, it’s getting really cold and soon the snow will be here.  There is one place in Stockholm called “Fryshuset” Where they have an inside park for BMX and skateboards. When I’m riding outside I’m either at two of my favourite track/park in “Alvsjo” or “Fadderbyn”.

Who inspires you and if you could have the chance, who would you want to ride with?

I have a lot of sources of inspiration, of course Dave Mirra, he is amazing! Im a big fan of X-games! Brandon Dosch, Colton Satterfield, Dennis Enarson, Kyle Baldock they are all great inspirations. The list can be long! I don’t know if i can choose only one of them, they are all amazing! But I think that my biggest inspiration are the kids out there on the tracks. They are so cool! And they just do it! Im amazed by them! If i would pick a girl I would say Jolene Van Vugt,  I love the whole Nitro gang! Im going to see them on my birthday here in sweden the 16th of November, it’s gonna be amazing!

What advice do you have for a new rider?

My best advice is to have your eyes and ears opend, don´t be afraid to ask others but remember we are all different, what’s easy for someone else can be hard for you and thats okay, take all the time you need, one day you will make it! Dont compare yourself with others, get inspired and motivated and remember to have FUN! http://bikergirl.se