Hey Nikki! Congratulations on making podium recently at the Vans Rebel Jam, for those who don’t know you, could you give us a little introduction on how you got into BMX, where you’re from and such?

My name is Natasha Nicole Wetzel. I go by Nikki which is my middle name. Born Silver City, NM, my original family is from Indiana. I was adopted by my grandparents when I was 13 and then moved to Florida.

I originally started skateboarding at a local skate park in Clearwater, Florida called 688. They used to have lock-ins every Friday from 7pm-7am. I brought inlines, skateboards and eventually bought a BMX bike instead of borrowing my friend’s bike all the time. I picked up BMX quick, but I didn’t actually start learning tricks until I was 18.  Since then, I’ve taken BMX to heart and I have been in love with it since. BMX has given me everything I never thought I’d have. It’s taken me places, and I’ve met ever single pro rider I’ve looked up to. It’s even saved my life a few times. My past was rough, but through the BMX community, everything changed for the better.

7 years ago I moved to California, got to meet and ride with a lot of pro riders through the years and met good people. Finally got to work at Woodward West too, which was amazing, but due to a bad relationship, I became homeless and moved to Las Vegas with a friend, and I’ve been here ever since.

Who are your sponsors?

Phillip Ranalli has been a homie of mine for a while, I’ve known Sunday/ Odyssey riders for a long time. Last year I was riding a bent BSD frame at the Vans BMX Pro Cup, and that weekend, I got a message from Phillip saying Sunday is going to help me with a frame! I was so stoked. They sent me a big box full of goodies that next week. So technically, Sunday/ Odyssey/ Full Factory are a homie kinda flow deal, and I’m very appreciative about that. Thank you Phil!

For those who don’t know, Rebel Jam was an invite-only event, how much notice did you get and who made the call to you?

Vans Rebel Jam was invite-only. I got a text message about being interested in the jam from Nina Buitrago, followed by emails from Andy Zeiss from The Boardr.

Editors Note: The event wasn’t official until about July 21st, riders received about under a week’s notice to get ready.

Pretty sick that the Rebel Jam was an additional event to the US Open Surf, the whole area must have been on fire. Could you paint us a picture of what else was happening in the area, for those interested in going next year?

US Open of Surfing had a sick layout. They built a sick skate park right on Huntington Beach by the Pier.  They had tons of companies with tents to check out and win free stuff while walking around.
They also built a massive Vans store right on the beach –  which is pretty sick! They also had a Vert ramp built on site for a demo. It was such a rad event.

So I heard that the course layout changed a few times before it was built officially, did you have an idea of what the layout was going to look like or was it generally a surprise? Did you have any input?

For the course layout, the course was perfect! I absolutely loved it. I’ve never felt so comfortable riding a contest layout. Definitely is my favorite so far. I didn’t have any input or know about any layout changes, but it was perfectly built in my opinion.

What did you think of the layout? Things you loved the most or least about it, and any fun facts that the fans should know. For one, I think it’s a temp course just for Rebel Jam right?

There were 6 riders/ 30 sec run/ 20 min jam. I personally think we should have had a little more time, like at least 45 secs. There was a lot more I was doing in practice that I wanted to do during the contest. Also, having enough time to ride from one side of the course to the other. I’m used to Vans Bowl contests, where your best run counts and you try to do a full perfect run, not do separate tricks in each run like at Rebel Jam. I really wanted to land the 540 & double peg that whole rail, which I got twice in practice, but I’m overall happy with what I put down. I always think I could have done better but I’m stoked with what I landed.

Also congratulations on winning best trick! I think it was a feeble grind to fast plant 360? Pretty dope!
My best trick was the feeble fast plant 360. Fast plants are my favorite trick, other than my new trick, 360 look backs. I used to feeble and lean too much and then put my foot down, but then I realized I could put my foot down and then spin out of it.  I’ve been doing that trick for like 5 years now.
It’s my favorite ledge trick. I also do feeble fast plant 360’s to smith on occasion.

Ok, I gotta ask about the helmet to helmetless ratio at Rebel Jam. What’s your stance on helmets because I think you typically do wear one, but you didn’t wear one at Rebel Jam. I’m assuming it’s optional there, do you lose points if you wear one? Give me the deets lol.

Yes, I do usually ride with a helmet. A lot of people asked me why I wasn’t wearing one and it’s because I felt comfortable with the course. When I ride street, I usually wear my hat backward, and not a helmet. When I ride my local park or bowls I always wear my helmet. I always tell kids to wear a helmet, because it’s for safety but I felt better riding without one for this contest. I was feeling the vibes, being jibby and having a good relaxed time, but I do have a gnarly hat sunburn tan line though! Haha.

It was announced really suddenly that the women would be getting equal pay from here on out, when did you find out and how stoked are you?! What does equal pay mean to you, especially because BMX isn’t your full time?

I’m so stoked Vans decided to change the payout. Originally it was $1,500 for first place, and then it was changed to be $10,000!!!! I was actually at dinner when I checked the practice schedule and saw it was changed and I was like ohhh my geez, they stepped up to the plate!  The equal payout is so important. Especially with women’s sports, and in general. We shouldn’t have to come out and ride and give it our all for anything less. There shouldn’t be a difference. We deserve just as much as the men do.  I don’t get paid to ride BMX in any way unless I win a contest. I work full time when I can, and I’m personally struggling financially right now. I had $20 this entire trip, and thankfully Ryan Mills is the man and helped me out. So honestly, this prize purse is going to help me pay my rent on time for once, put food in my fridge so I can eat right and take care of my dogs. They are important to me. I always put the safety and health of my puppies before anything. They are stoked to have the best dog food and new toys!

I was pretty stoked to hear a Dude Bird shoutout, a lot of people may not know them because it’s kind of like a group of awesome shredders within the Florida BMX scene right? Who or what is Dude Bird exactly and why the obsession with birds?

Dude Bird is a Florida BMX riding group. They were a part of Props: Megatour 10. I was currently homeless in Tampa, FL when I met Jordan Pope. He took me into his family in Lakeland as their own kid. Since then I’ve been a part of Dude Bird. I don’t know exactly where the name came from or anything, but the Dude Bird memes are hilarious. Ask Brett Rohlfing about that! So check out Dude Bird and all the weird YouTube videos and Megatour 10. Riders include: Spencer Foresman, Jordan Pope, Brett Rohlfing, Dave Mahoney, Zack Gerber, Cabe Crisler and to this day many local Florida BMX riders has risen to support Dude Bird.

So what’s next for you?

I really wanna ride more contests, be more involved, ride better, train and support women’s BMX. I also want to get involved with FISE too. I need to buy a UCI license and go to C1 events, and try to do that at some point. I need to make more money so I can go to have the opportunity to do that.

I don’t care about winning. I just wanna go to these contests and have the best time. Feel all the good vibes, and ride with all the girls and full send it. Riding BMX is the world to me and I’d love to be able to travel the world to do it. 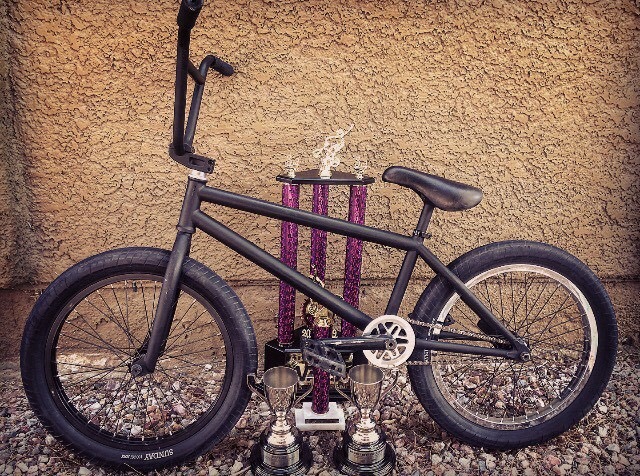 Nikki’s set up during the Rebel Jam

Open
That hair flip tho, extra style points to @linda.