The NORA Cup Awards, which first started in 1985 is one of the most prestigious awards in BMX, paying homage to the best in BMX by the people in BMX. This year was extra special, with the addition of a women’s category. An exclusive number of female riders were given the opportunity to cast their vote in the first-ever NORA Cup Female Rider Of The Year Award, and to no one’s surprise, the most deserving woman received it, Nina Buitrago.

Congratulations on winning, this is huge! Let’s first talk about who you nominated for and why?

Nina: The award said to name who you feel was the number one rider of the year in the women’s category, and so for 2019 I chose Hannah Roberts!! She has been putting in so much work and making history for women at almost every event she’s attended this year.

You and I briefly talked about the win, and Nina you deserve this, but obviously, you’re super humble and can’t fully celebrate it, so I’m going to go therapy on you and make you finish the following sentence. I deserve this win because … (yes you have to fill it out)

Nina: I can’t control or stop people from doing what they did, BMX is crazy and I’m so honored 🤦🏻‍♀️ but from now on I hope they read the instructions !! Rider of the current year lol 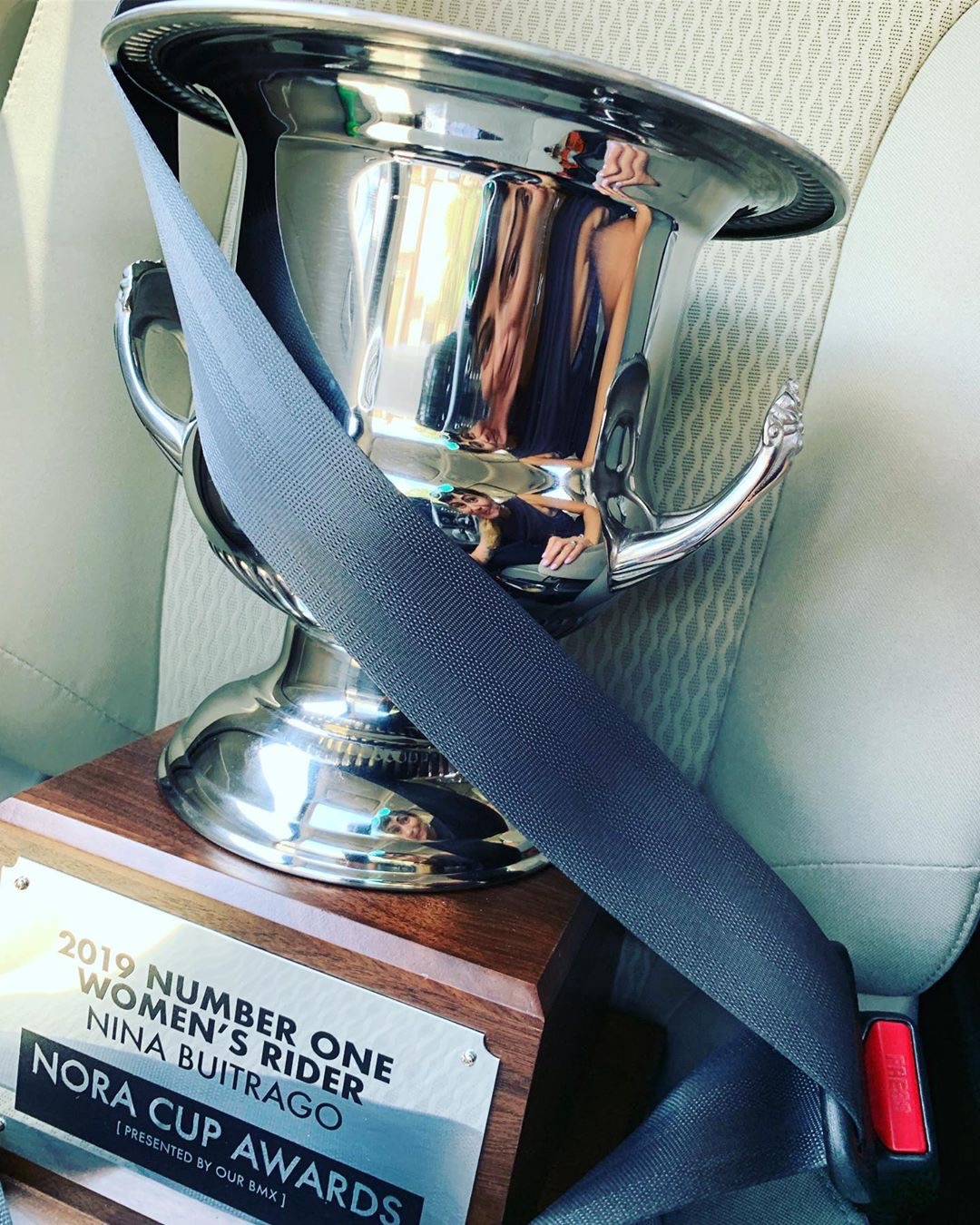 So do “team meetings” happen often at Empire BMX, how surprised and unaware were you of what was going to happen? Did you have any inklings that maybe there would be a trophy in the Amazon box? What did you think the team meeting could have been about? lol

Nina: Team meetings don’t happen that often and so I was like woah, they must have some news, but I’ve been working so much lately and happened to actually be in town, so I didn’t want to miss it! I was tight on time running behind trying to get ready to go out of town, so when I ran in on my lunch break, I literally just stopped in my tracks, I was so confused why so many people were there also?! Even some of my non BMX riding friends were there for a team meeting?! I have never been surprised like that, and couldn’t think of any reason WHY 🤯 It wasn’t until I reached my hand in the box and felt the edge of the cup, my heart immediately dropped and the tears began to flow.

I assume someone at Our BMX would have suggested for you to come out to Hastings to hang out right? Also slow clap for those who didn’t spill the beans am I right? lol

Nina: Jeff Z called me and told me they were offering the award and asked me to be a presenter, I was like holy yes! Then oh dang.. wait, when are the dates again?? My boyfriend and I had just booked a trip for his birthday that weekend before heading to the Vans BMX Pro Cup. So at first I was stressing, then Z called me back a few days later and was like well, you can’t be a presenter if you’re a nominee, and asked me to try to still make it. Honestly, I looked into it like crazy, it just wasn’t realistic to come out on less than 2 weeks notice with the other plans I already had made, no refunds and then 5x the amount $ to go to England… I didn’t want to bail on my dude or bail on BMX for the first women’s NORA cup EVER… It was hard but I just had to stick with the original plan, in the bustle and hustle of getting ready to leave town and this team meeting, I didn’t even think to put any of it together. Even down to Tina telling me not to park out back because Steve was having a motorcycle event. I was like woah crazy cool, I’ll have to check that out later hahaha 🤦🏻‍♀️ (so I didn’t see everyone’s cars who came to surprise me)

How did it feel to go to NORA Cup year after year to see other peers get awards and none for females? I feel like, if there was a year to do it, it would be this year, but what about you?

Nina: I mean, it’s always awesome getting to celebrate a rider/homie receiving an award, I always thought how cool it would be if there someday was a women’s award, I think this year was definitely a great year to do it. It means more that they did it this year before the Olympics for BMX to show they fully recognize support and celebrate women on this level. It’s amazing and as most would agree, about time.

Where’s the trophy today, does it get a special place in the house?

Nina: It’s at my house on the dining room table with flowers for now till I get back, I don’t know what to do with it yet lol 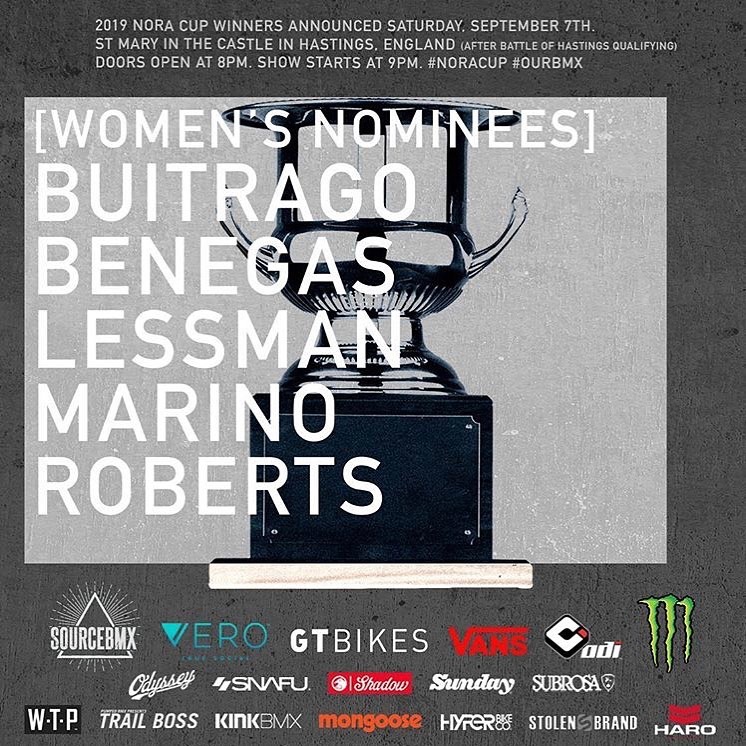 It wouldn’t be a complete interview, without interviewing the people behind this award, so we reached out to Ryan Fudger on behalf of Our BMX for a few quick words on this historic moment.

When the email went out for nominations, was the choice pretty clear right off the bat based on the responses coming in?

Ryan: Voting usually comes in waves. People that have strong opinions usually vote quickly, but a majority of the votes come in after a couple of days when I send the reminder email. Nina took an early lead and looked pretty strong, but Hannah steadily got votes and made it fairly close in the end.

Nina winning is well deserved, she’s been a part of the community for a couple of decades now, but what does this win mean to the team at the Our BMX office? There’s significance in this you know? Nina was very likely, the first female who was probably featured on Ride BMX back in the day and for me, this just feels like a full circle.

Ryan:  I can speak for all of us when we say we’re beyond happy to see Nina win. 2019 was a rough year for her and she’ll be the first to say it wasn’t her best year on the bike. While NORA Cup is supposed to be a rider of the year award (and not a “best ever”) category, it made sense on every level that Nina was the first to receive it. She’s pioneered, pushed, and sacrificed for women’s BMX for well over a decade, and it’s pretty safe to say that we may not even be doing this award without her effort. All the other nominees—Lara, Hannah, Perris, and Angie—will surely have their shot at getting a NORA Cup in the future, but Nina deserved the first.

Was there a specific person on the team who started the conversation for a female category, and what’s their address for me to send the edible arrangement? But seriously, not asking it as “why now?” but more of, what was the inspiration behind making this happen?

Ryan:  Hah, I mean, I guess I was the one who said “we’re doing it.” Obviously, it’s been a wild year for us with the death of Ride and all that, so we were all over the place with NORA Cup. For a while, we weren’t even sure if we could monetarily make NORA happen. We had loose talks about adding a Women’s category, but we officially made the decision kind of late the game. I listened to Angie’s Unclicked podcast and for whatever reason, it kind of just tipped the scale for me. Adam Watkins has always been advocating for a Women’s category, but in 2018, we came to the conclusion in the past that the sampling for who would vote and, more importantly, who would win, was rather small. Sort of the same reason we’ve never had a Vert category. But, as you know, women’s BMX has made massive strides and being at several events and seeing just how many women are out there in the world made it seem like the correct time to step up.