16 years ago in 2003, when Hannah Roberts (2017 UCI BMX Freestyle Women’s World Champion) was 1 year old, women in BMX had their first clinic at X Games. It wasn’t until 11 years later in 2014 that the first demo was announced.

“In 2014 the relationship began with “Practice sessions” they sometimes referred to as demos, but to be clear, in the most recent conversation according to X Games, they were officially practice sessions, started off with 4 women, on the street course at the same time with the men for a few hours. Every year I tried to push for an official event, got denied then pushed again for them to at least allow a few more women to attend and also for it to be moved to the park course and out of the men’s way.” – Nina Buitrago

The demos were pretty makeshift at first, the ladies had to bring their own music for a while and even their own photographers. It wasn’t until 2017 that the women were able to demo in front of a crowd and with an announcer, and just last year the production was even stepped up a notch, with more structure and even TV prep. The one thing I didn’t mention at first though, was that every year since 2003, there’s been a petition to have a Women’s BMX medalling event at X Games, and every year including this one, we’ve been left disappointed. 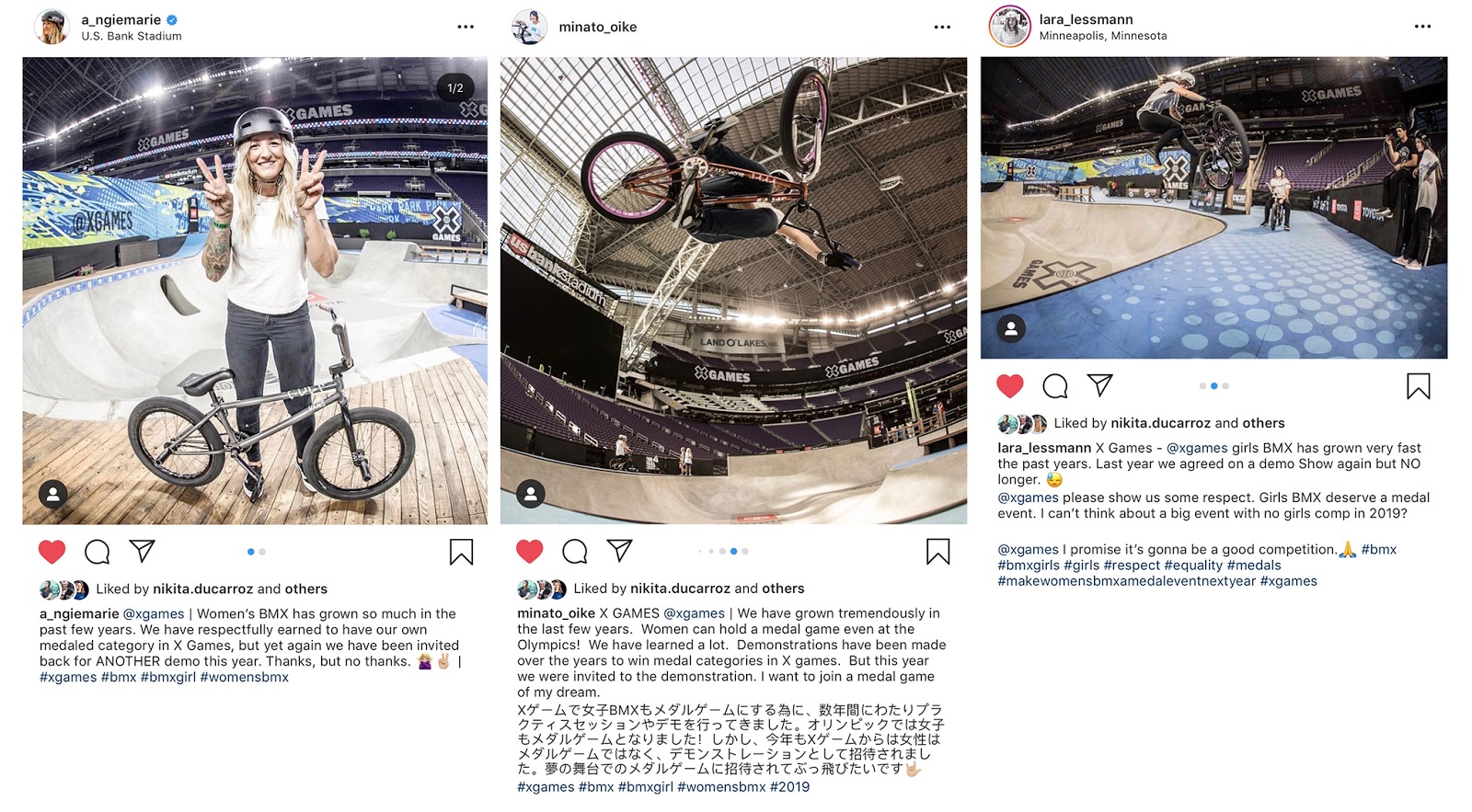 Outside of X Games, in just the last two years we saw Women’s BMX Freestyle added to the 2020 Olympics, Vans Pro Cup and the UCI both offering equal pay, and female BMX riders featured in ad campaigns including H&M, Old Navy, Red Bull, Jack Link’s and countless others. Within the last two years, we also had two female world champions wear the coveted rainbow stripes, further demonstrating the growing talent available. Heck, in just a weekend covering the first FISE stop this year, over 124k people were reached according to our Facebook page stats, and that’s just two girls with outdated MacBooks posting photos and scores – also did I mention Facebook?

Over the years, X Games has provided reasons for not holding a contest for the women, marketing value being one of the key elements. Are the guys going to have more viewership? YES… of course, they better be considering they’ve been a part of X Games since the first one in 1995. Like any new character added to a long-running show, you need to give it some time to grow. Ronda Rousey didn’t make history with PPV buys until her 12th fight. The difference between Ronda Rousey starting out and Women in BMX? Aside from the obvious, we already have reputable competitions backing women’s BMX, and the ladies are coming in hot with a large following. Check out the combined reach of some of the ladies competing today made by Angie Marino. 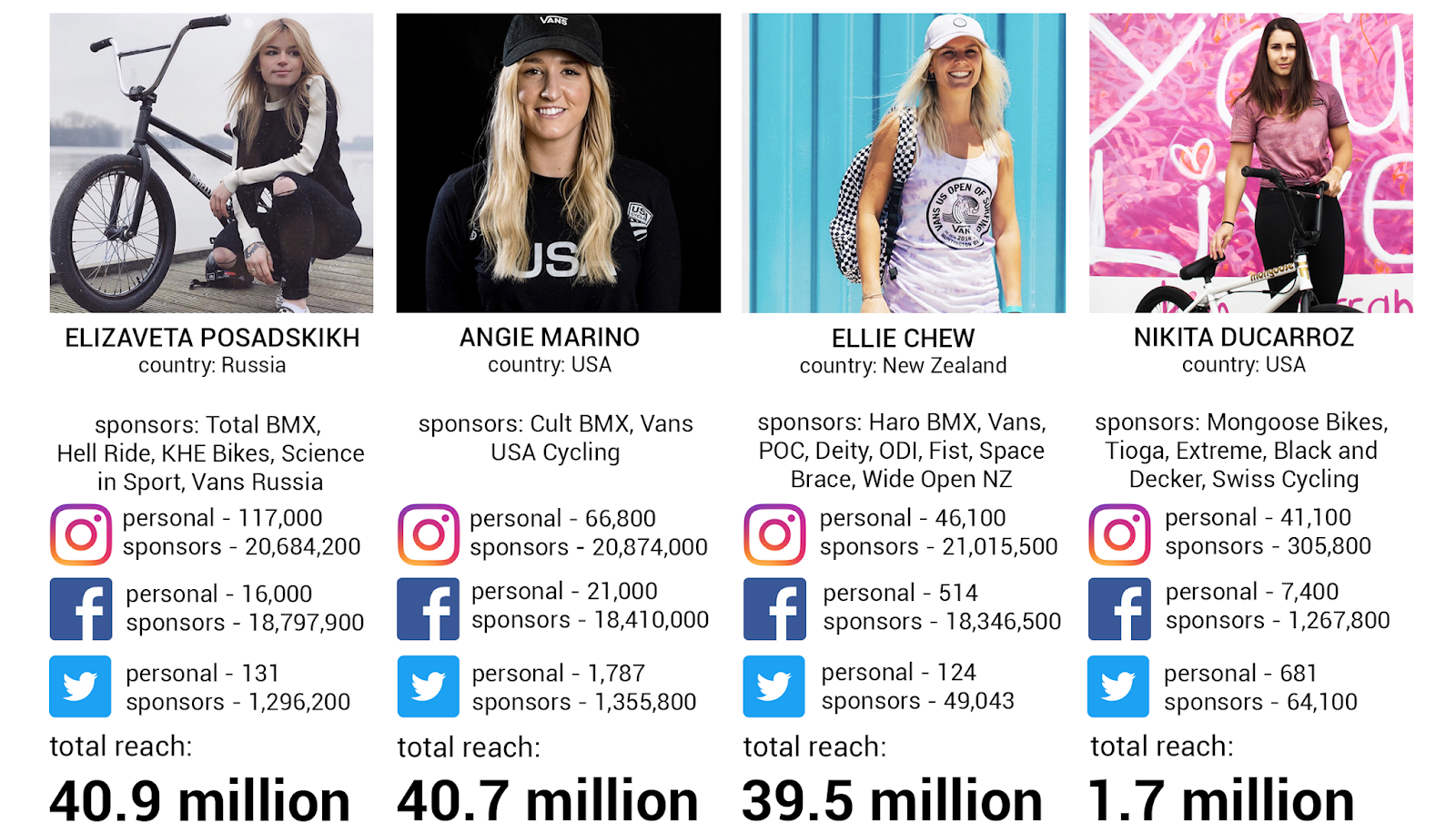 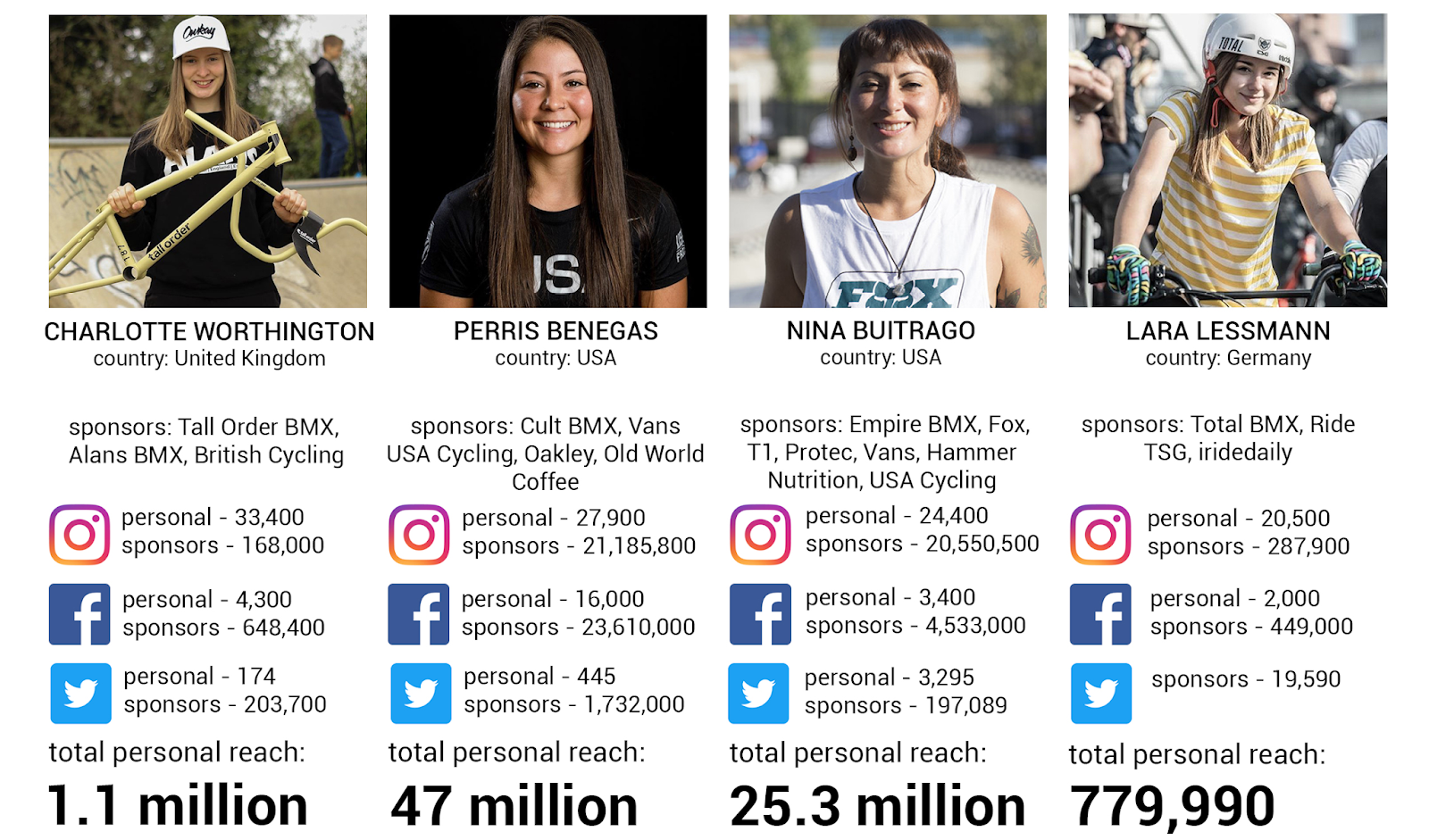 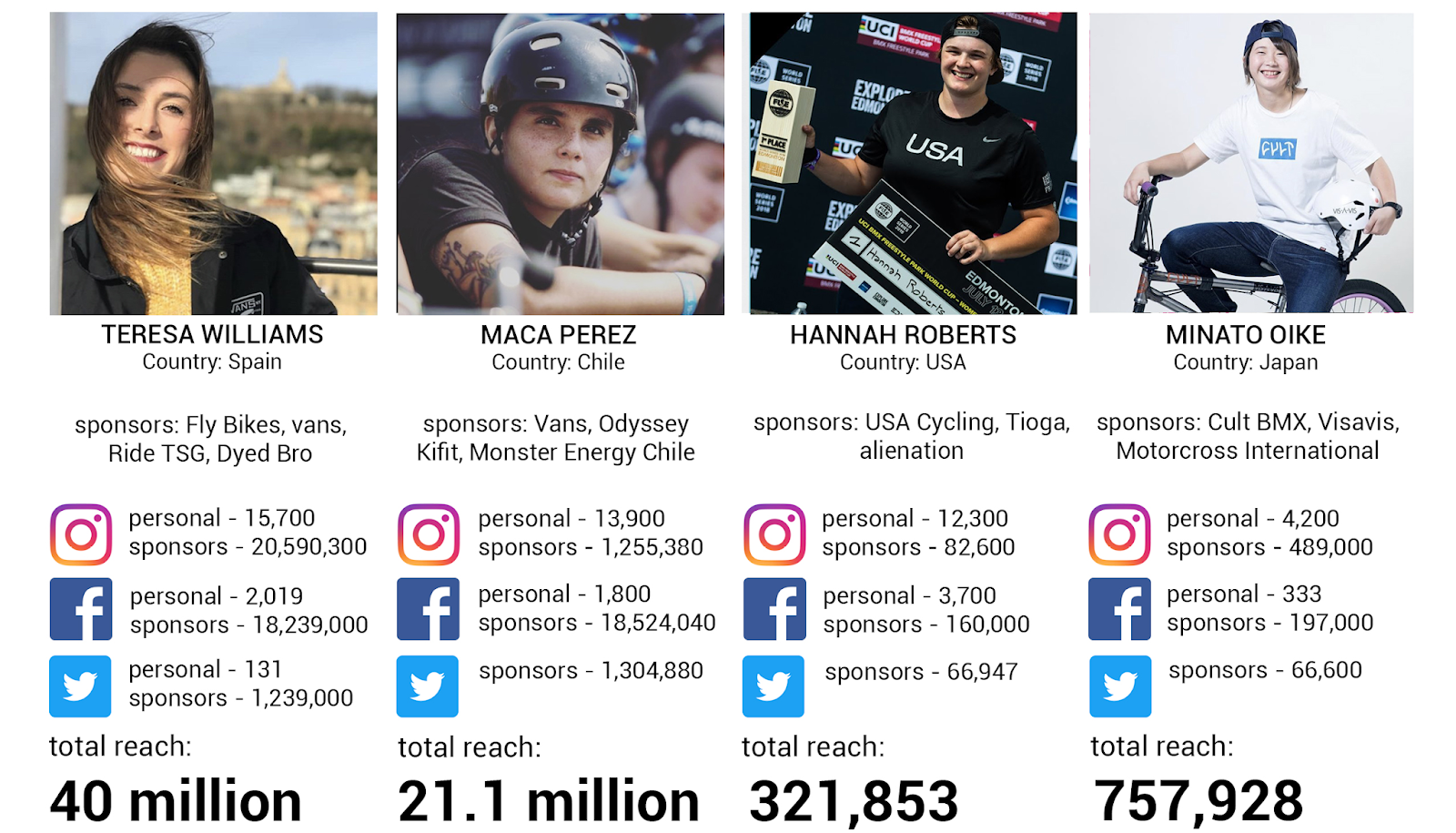 There were other reasons given that don’t quite measure up, like time, scheduling, and budgets. Considering the climate we’re in today, it’s shocking that X Games has failed to stay current, and if they stay the course, very soon if not already, they’re going to be left behind. Sources have told us that the women even gave up their offered appearance fees this year, just so that X Games could have the budget to put a prize purse together and run a real contest. Despite trying to solve the budget issue, a demo was offered again this year …  which begs the question, what happened to that time and scheduling issue?

“With the Olympics less than 1 year way, it actually is asking too much for everyone to pay their own way out from 10 different countries for a demo.” – Nina Buitrago

This is a prime time to be investing in women’s sports, especially in BMX with the Olympics coming up and countless projects in the works, with women in mind. Check out and download this Nielsen Sports research project highlighting the untapped potential and new commercial opportunities in women’s sports. 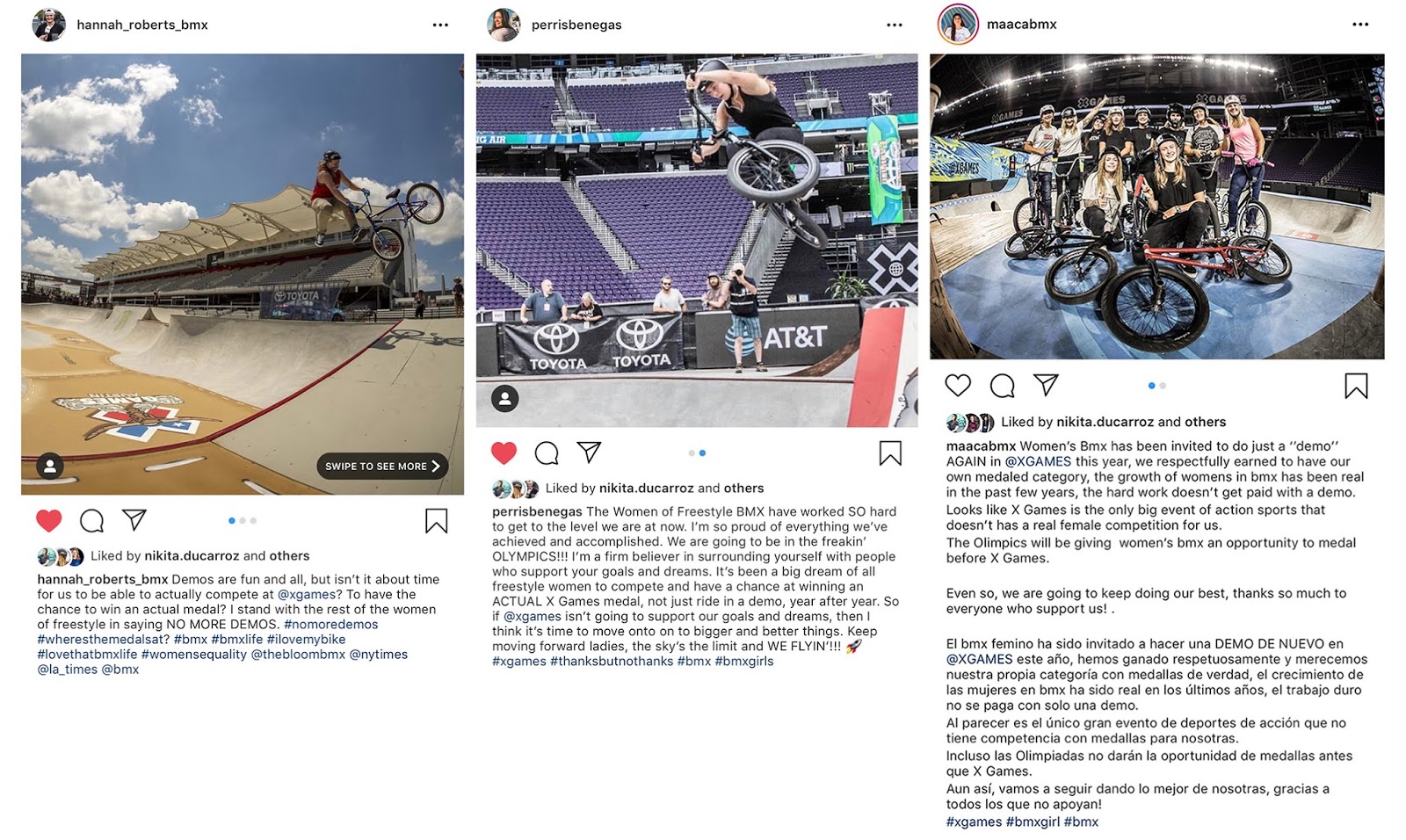 In the past few days, the amount of support we’ve seen from YOU has been amazing! However, what caught my attention was a few people who supported us, but used the word bandwagon. Although I understand where this is coming from, one thing has to be understood. The movement we’re making here isn’t just for the current generation of women in BMX, it’s for the next generation too.

To X Games, we do appreciate the years you provided the women the opportunity to demo,  but we respectively have to decline now. We look forward to the day when the women are offered the opportunity to compete at X Games.
WHAT CAN YOU DO TO HELP?
Angie MarinoFISEHannah RobertsNina BuitragoOlympicsUCIVans BMXWomens WeekendX Games

Talking About Mental Health through MindTricks

Open
Yass Angie! Super stoked for this new edit from An

Open
This one time @a_ngiemarie texted me and said she

Open
We are so stoked to announce @TheBloomBMX Week at

Open
The final results for The Elite Women at the 2021

Follow what lights your FIRE 🇬🇧 I’m eternally grateful for the Olympic path I’ve been lead down and those that have guided me every step, ... I’ve learned a LOT I can’t wait to represent my country doing what I LOVE 🦁 LET’S GO @tokyo2020 #tokyo2020 #teamgb #bmxfreestyle #bmx

Over the past 5 years I strived to qualify for my third Olympics in TOKYO
Sadly I haven’t been chosen by the selection panel!
Full of fomo & ... support I’ll be cheering along all our @ausolympicteam @AusCyclingTeam @AusCyclingAus